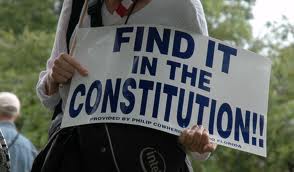 Especially not through the 13th and 14th Amendment, which were switched, removed and added.

It would be great respect for our fore fathers,  they would stop passing all these UN- Constitutional Bills, anything repugnant to the The Constitution is no law. I didn’t write it, but never-the-less it’s there. And it’s amazing how Congress, is in on it, Senate ect…? They know they took an Oath, they all did. That is what gives them the power. And without obeying it, they in “reality” have none. Along with the criminal media, accessory to the crime. They are out of control, like bad kids in a candy store, after they have held the owner up, doing everything. And have others mimicking them? It’s like they can’t be our government, it has to be rogue. And they’re writing their happy rears off, breaking every standard this country was built on. We have learned some very vital knowledge, about who is controlling this, along with putting us in danger of EVERYTHING at the same time. Whether any thing comes of good people trying to help or not, I appreciate them, because you have people holding vital positions dealing with the good of this country, which people are their in a usurpation way, and caring on with their individual acts daily anyway?

No matter what is written, I am happy just to know the reality of it.

At one time I didn’t and it makes a huge difference to me, when I see a bunch of people who

are hell-bent on having their world, they think, all the while being used. I know the elite shake their heads because I sure do when I look at them and say, the fool on the other side, wild wild west.

Peace to all, involved, the world.

Being a Goan, I think, I can take the liberty to say that Goan’s have been making these fluffy babies for multiple decades. As far as my knowledge, Banana Pancakes have been a recent hype that is still catching on in the US culinary world but I wouldn’t argue that Banana Bread is definitely an American Classic.

These Banana Pancake were enjoyed by us for evening Tea Time, which is a social activity for most Goan’s from 3 to 6 pm. Hoping that this leisure activity does not cease.

* In a mixing bowl mash 8 over-ripe bananas, mix in the egg. Next add the flour to the mixture,vanilla and salt…

Socialism is not the Answer

Syndicated columnist Charles Krauthammer on Tuesday said the American people have the “smoking document” that proves the Obama administration took part in a cover up in the aftermath of the deadly Benghazi terrorist attacks.

Judicial Watch has released newly declassified emails that suggest top-ranking Obama administration officials coordinated in 2012 to make it appear that the deadly attacks on the U.S. facilities in Libya were sparked by an “Internet video” and not “a broader failure or policy.”